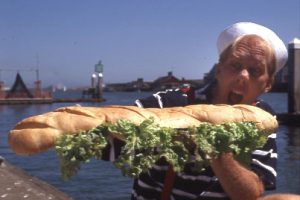 “Preschool-age kids will…enjoy watching the daffy Mr. Humdinger and his sidekick Mr. Fin (a fish puppet) as they encounter a series of misadventures while accompanying the captain on the fishing expedition.”

“A slapstick clown joins the commercial fishing boat to work; his sidekick Mr. Fin is a tuna fish. As he learns his way, the 3-7 year old viewer is introduced to the world of boats and various activities aboard. Often silly, Mr. Humdinger’s antics are apt to tickle funnybones, but he gets serious when serious business of work is shown.”

“Mr. Humdinger and his buddy Mr. Fin lead the viewers through a day in the life of a commercial fishing boat/crew. There is a strong emphasis on slapstick comedy as the rubbery-faced Mr. Humdinger bumbles his way through the various areas of the boat, safety drills, fish catching and sorting, etc. Cartoon music and sound effects add to the craziness, and children who co-reviewed Mr. Humdinger expressed their approval. The videography is professional done, as is the editing. By the end of the show, after a trip to a fish processing plant (where Mr. Fin gets sucked up the giant fish vacuum) and the boat is cleaned, kids should have a rough idea of the process by which fish appear at the supermarket.” 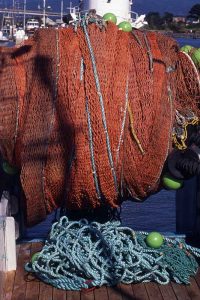 “Filmmaker Kurt Snow of Sacramento has joined the occupational video club with the release of “Mr. Humdinger Goes Fishing.” In it he profiles a day in the life of a commercial fisherman … Mr. Humdinger, played by Snow, is a comic character who, with his puppet friend Mr. Fin, learns about fishing equipment, takes a tour of a fishing boat and tags along on an ocean fishing trip, complete with the delivery of fish to a processing plant.”

“If your child loves boats, the sea going, fishing kind, then they will enjoy learning more about how these boats take to the seas. In this video, which talks exclusively to the very youngest viewers, Mr. Humdinger bounces around the ship playing parts that are equally goofy and informative. This was the right mix for our young testers who were laughing and learning and gave the video tape a thumbsup review.”